Outside of academic areas, the power of learning through exploration, inquiry and discovery is unquestionable. Most of the billions of Google search queries that happen every day - and the subsequent searching through websites and media - fall under this category. Every honest question asked - even in the classroom - demonstrates the ability to self-direct learning.

Nevertheless, there is still much controversy around the idea of learning by discovery in school. Much of this controversy stems from a couple of meta-analyses that ruled strongly against discovery learning. Below are some excerpts from two of the most popular ones:

You might expect such strong words to be supported by strong research. Unfortunately, that's not the case.

Good research requires clarity; if not about the answer, at least about the question. However, as far back as 1969, a meta-analysis looked at experiments that had been perfomed thus far and determined that (emphasis added):

Decades later, things have not improved. In that 2011 review by Louis Alfieri et al. now cited close to 1000 times, researchers asked "Does discovery-based instruction enhance learning?" and attempted to answer it by studying more recent experiments. Their conclusion:

"What exactly constitutes a discovery-learning situation is seemingly yet undetermined by the field as a whole". The fact that this was on page 4 but they continued to write another 77 pages is telling.

In one of the most popular articles ever published on the Public Library of Science, "Why Most Published Research Findings Are False", John Ioannidis determined that (emphasis added):

"a research finding is less likely to be true when... there is greater flexibility in designs, definitions, outcomes, and analytical modes".

It doesn't take much to realise that in discovery learning "greater flexibility" is literally the goal! Unfortunately, that increased flexibility in learning situations - which in turn increases the flexibility of experimental designs - makes the research findings of meta-analyses much less likely to be true. Intuitively, this is easy to grasp: if each experiment measures something slightly different, combining their results is a difficult and dangerous game.

Despite this fundamental problem, both meta-analyses have been cited many times as evidence against inquiry learning. Instead, they should only be cited as evidence of the flakiness of existing research!

Even high quality research can mislead its audience through its definitions. When broad, common words are used in specific technical ways, it is the responsibility of the researcher to highlight the difference usage. Otherwise, interpretations easily become skewed and overreaching. In this case, when researchers talk about learning through "discovery", they often mean something quite different from how the word is normally used.

When Alfieri's team looked for the implicit assumptions underlying the research they had analysed, they concluded that:

"... discovery learning occurs whenever the learner is not provided with the target information or conceptual understanding and must find it independently and with only the provided materials... Common to all of the literature however, is that the target information must be discovered by the learner within the confines of the task and its material "

Similarly, in his popular 2004 article, Richard Mayer claimed that: "when students have too much freedom, they may fail to come into contact with the to-be-learned material ".

Hence, despite using somewhat different language and experimental designs, most researchers assume that discovery requires some "target information" and that it must be learned within some environmental "confines". It is also clearly implied that both the target and the confines are to be set externally (e.g. by the teacher). 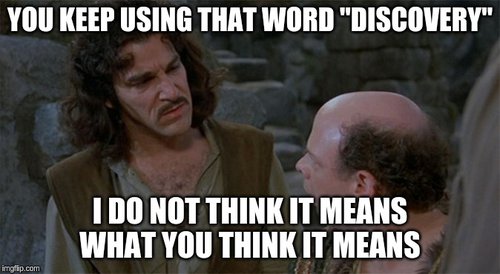 The problem is, if you're looking for a good definition of "discovery", that's not even close! In fact, it's such an inauthentic definition that it brings to light the ruling paradigm under which these experiments are designed.

In that paradigm, learners are fundamentally and unquestionably dependent. The teacher chooses the target. The teacher chooses the confines. "Discovery" is then merely allowing students to scamper around like rats in a carefully-designed maze, often in order to find cheese which they don't really like or want. Whether or not this is a good way to learn, it's definitely misleading to call it "discovery". It also doesn't accurately represent the myriad number of situations outside the classroom in which humans learn successfully through self-directed search.

Outside of artificial mazes, in real life we can choose our own destinations and change our approach as we progress. Since researchers' definitions have been skewed to rule out any kind of learner independence from the very start, we end up with conclusions that simply reflect their initial assumption that students can't direct their own learning.

The Research is Underwhelming

When high-profile figures such as John Sweller continue to cite Mayer's 2004 piece as "overwhelming and unambiguous evidence" against discovery learning, I feel compelled to disagree.

For now, we have many superficially related experiments bundled under the same umbrella term, even though they are each designed to measure something different.

Where there are commonalities, they are based on inauthentic formulations about discovery, such that any strong conclusions drawn about its effectiveness only pollute modern discourse with misinformation.

There is no good research on discovery learning, yet.

For more on this topic, see: Problems with Discovery Learning Experiments